Current events for the open science in France

The news of the beginning of July is rich for the open science in France and places the services of the CCSD in the forefront. 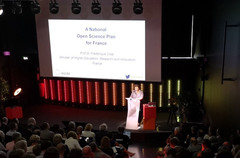 The French Minister of the Higher Education, Research and Innovation, Mrs Frédérique Vidal, attended the LIBER annual congress to present the National plan for the open science. Her speech is available in french on the website of the Ministry. She said that Choosing open science means allowing our scientific production to find its readership, the broad and universal readership it deserves. She mentioned HAL as a main asset and reminded the audience of the last functional evolutions made to the service to facilitate submissions.

The national plan for open science sets the conditions for the development of an open science in France. It is composed of three axes, which place French research at the heart of the global movement toward openness and transparency of public action. It contributes to the Open Government Partnership (OGP), an international coalition that promotes the principles of transparency, citizen participation and democratic innovation.
The first axis is to generalize the opening of publications with 3 measures: make it mandatory to publish open access articles and books from publicly funded research, create a fund for open science and, finally, support the open national repository HAL.

The second axis aims at structuring and opening the research data and divide into 3 initiatives: to mandate the open dissemination of research data from programs financed by calls for projects on public funds, to create the role of data manager within the institutions and organize an associated network, and to promote the adoption of an open data policy associated with articles published by researchers. This axis specifically mentions the support to Software Heritage to which HAL is associated for software repository.

And finally, the last axis aims to put France in a sustainable, European and international dynamic: numerous means to develop skills notably with the creation of a label « Open Science » for doctoral schools, a commitment from research operators to adopt an Open Science policy. These measures also aim to contribute to European structuring within the European Open Science Cloud and participation in GO FAIR.
The Open Science Committee, planned in this axis, is in the process of being set up following the call for expressions of interest. The axis also mentions a national membership to ORCID, as well as a support for the search engines scanR and Isidore to develop their notoriety and use.

The CURIF, which brings together 18 french research-intensive universities, has published its proposals for the Open Science with three main objectives: the opening of publications, research data and the development of training and skills for Open Science. Open repositories like HAL, are clearly stated as a way of opening the publications as well as the development of open alternative editions, of which Episciences is one innovative example. To implement its 3 objectives, the CURIF is committed to 4 actions: constitution of a fund of 800 000 euros to finance projects, implementation of a policy of submitting publications in an open repository, setting up a referent in each of the institutions to define and implement a data management plan and, finally, organize Open Science training courses at all levels. French policy is committed to making open science the default daily practice for researchers and this is good news.