A shared governance and a sustainable financing model for HAL

On July 16, the Open Science Steering Committee approved the evolution of the financial contribution made by the French scientific institutions with a HAL portal as well as a new governance scheme for the Center for Direct Scientific Communication (CCSD), the service unit that created and still develops HAL.

HAL is a major part in the French national policy for Open Science: it enables the diffusion of more than 750,000 scientific documents and hosts 124 institutional open archives (portals). Its development requires a sustainable increase of financial resources. The current recurring revenues of 1 million € are brought by CNRS, Inria and INRAE. In addition, an annual financial contribution has been requested since 2018 from the institutions with a portal. The amount and terms of this contribution are evolving: the steering committee for Open Science has approved the principle of a contribution based on the number of researchers of the institution.

This contribution will be implemented in 2022.

A new governance for the CCSD

The objective of this new governance is to better involve users in the development of the platforms and to strengthen the scientific council by giving it an international dimension. 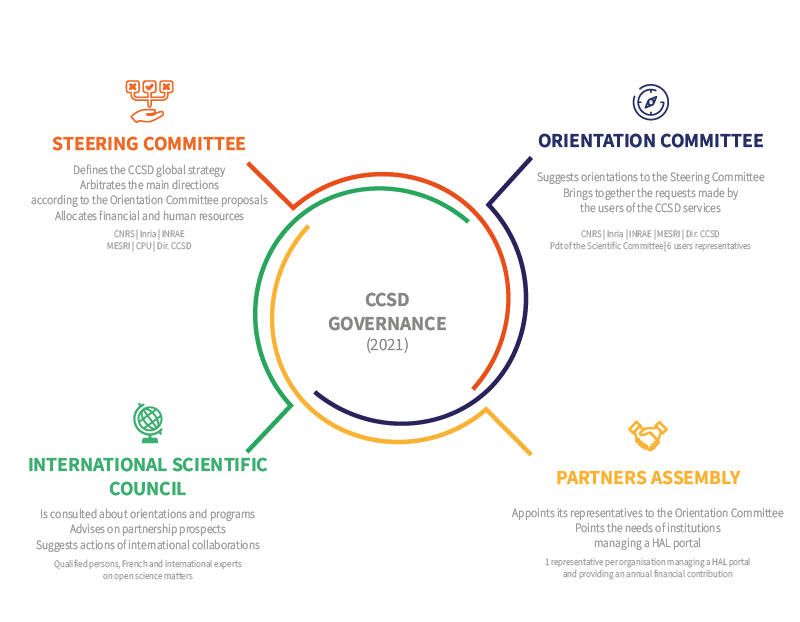 It will be implemented in 2021 and is organized in 4 bodies:

These new elements will allow the technical consolidation of HAL, the development of new services to users and institutions, and they will promote a better insertion in the ecosystem of European open science infrastructures.