HAL officially kicked off its 20th anniversary celebration ‘sat the Musée des Confluences in Lyon on November 24. This was a great opportunity to bring together the CCSD’s team, the unit’s supervisory bodies, the key players in its history, as well as partners and supporters. It’s pretty hard to share a cake with all users who have made HAL’s odyssey possible, but everyone could enjoy the ceremony livestreamed from the heart of the museum. The video recording in French is still available for those wanting to relive the experience online. 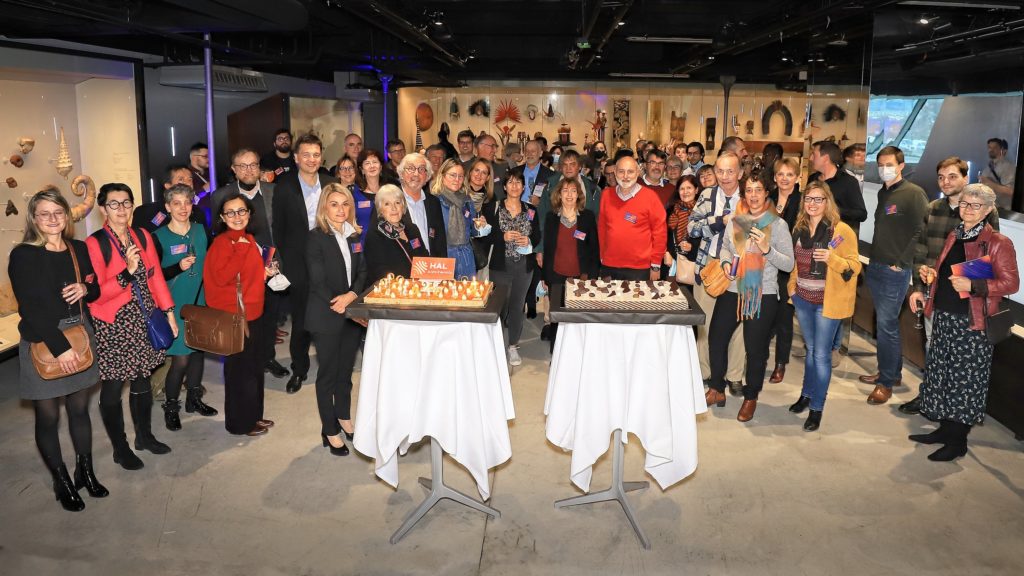 After a warm welcome by Nathalie Fargier, director of the CCSD, the Ministry of Higher Education, Research and Innovation, represented by Nicolas Chaillet, praised the progress made and considers HAL « as a common home for French research ». The ambition of the second National Plan for Open Science (PNSO) is to create an ecosystem consolidating source codes, data and publications by reinforcing the convergence and complementarity of open science infrastructures, a network in which HAL has its place. Today, « with HAL as with the future service research.data.gov », the whole research community can be proud of having « developed a French model of mutualisation ».

The CNRS has played an essential role in the genesis of the CCSD by bringing human and financial resources into a coordinated effort. Antoine Petit, Chairman and CEO, evoked the important role of his predecessor Edouard Brézin and traced back the story of HAL’s founding by the physicist Franck Laloë. In 2019, the CNRS Open Science roadmap places HAL at the heart of its strategy for the opening of  publications, particularly by requiring researchers to deposit the full text as an essential step to completing their activity reports (CRAC). According to the Open Science barometer, 67% of publications produced in the laboratories affiliated to the CNRS are in open access, and 91% of all articles are openly accessible thanks to open archives.

Jean-Frédéric Gerbeau, Deputy CEO for Science at Inria, outlined in turn the main reasons why the institute preferred HAL to developing its own system. The HAL-Inria portal, HAL’s first institutional portal, brought to life a patrimonial corpus comprised of the researchers’publications, of which 85% are available in full text today. This clearly avoids any fragmentation and dependence on other platforms.

Philippe Mauguin, Chairman and CEO at INRAE, emphasised that the migration of the institutional archive Prodinra, also created at the beginning of the 2000s, has been a great success: 66,000 documents and 240,000 bibliographic records have thus been integrated into HAL. With HAL for publications, recherche.data.gouv for research data and Software Heritage for software, the french ecosystem makes up a remarkable national organisation.

Lise Dumasy, advisor for the open science at the CPU (Conference of the University Presidents), ends this overview by recalling that as early as 2005, research organisations and universities already set up a fruitful collaboration for the development of HAL. With more than 100 portals of universities and Grandes Ecoles, HAL is one of center pillars of the whole distributed system implemented on the national level.

A round table discussion then brought together Daniel Charnay, one of the founders of HAL, Christine Berthaud, former director of the CCSD who succeeded him in this position, and Nathalie Duchange, researcher at Inserm. The participants shared some memories and anecdotes reviving the beginnings of HAL as well as its HAL-SHS and HAL-INSERM portals.

For Nathalie Fargier, who concluded the ceremony, « the future of HAL relies on its capacity in consolidating its value of use for researchers and institutions ». The challenge is to collectively build HAL as part of the dynamic open science movement

The 20 years of HAL bring us to the beginning of a new era, marked symbolically by a change of image. Nathalie Fargier revealed the new visual identity of HAL (see more on this post) which is now represented by a beautiful orange planet evoking the pooling and dissemination of knowledge.